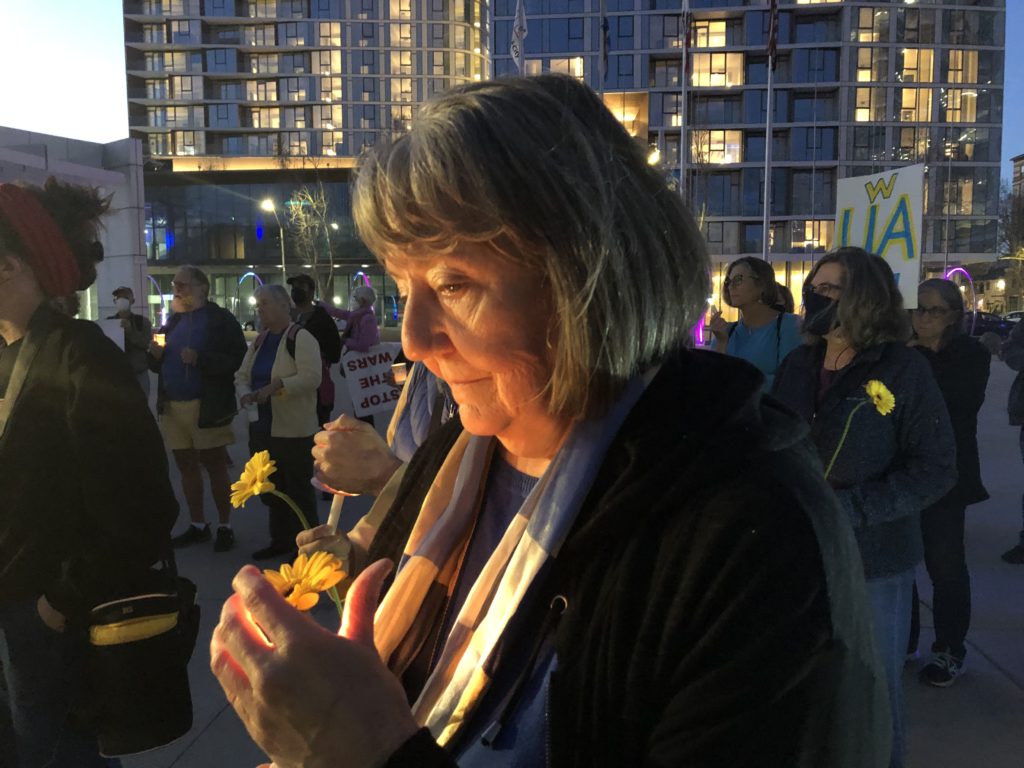 Rather than break ties with its sister city in Russia over the ongoing conflict in Ukraine, San Jose officials are choosing to keep communication lines open.

The City Council voted unanimously Tuesday to send a letter of peace and support to sister city Ekaterinburg, Russia, encouraging its residents to stand against President Vladimir Putin.

A sister city is a long-term partnership between two communities in two countries, according to Sister Cities International. Sister cities were initially created in the 1950s to foster peace, but can also promote tourism, trade, educational and cultural exchanges and projects. San Jose has at least eight sister cities including Okayama, Japan and Dublin, Ireland.

“My intention… was to be symbolic to our community here in San Jose and also in the South Bay,” she said.

Resident Nancy Taylor said she’s concerned for Ukraine, but it helped to stand with others at the vigil in front of San Jose City Hall on March 9. Photo by Lorraine Gabbert.

Mayor Sam Liccardo said in a statement that rather than seeking to isolate Ekaterinburg, San Jose should forge stronger bonds with them, and support their dissent. He said sister cities promote dialogue despite of and because of the deep differences of national governments—and the voice of the Russian people may provide the last, best hope for peace in Europe.

“I appreciate that we’re all trying to just find ways we can be of some use in what is a horrible, horrible situation of Russian military aggression against innocent civilians and innocent people in Ukraine,” Liccardo said Tuesday.

Councilmember David Cohen initially suggested San Jose send two letters—one government-to-government and one to the sister city organization—saying the City Council “is heartbroken to see what the Russian government is doing in Ukraine.” Cohen said he didn’t want to use the letter as a threat of suspension, but an expression of support.

But Councilmember Sergio Jimenez, who serves on the board of Sister Cities International, said a government-to-government letter might have a chilling effect on the sister city relationship and suggested only sending a note to the “people of the city.”

“I suspect during this time of conflict that many mayors and other elected officials in the country are trying to cover their own butt if you will,” he said, adding a government-to-government letter would have the same impact as San Jose severing its relationship with Ekaterinburg.

Stanford University student Kateryna Pistunova, who has family in Ukraine, said it was uplifting to see the turnout at the vigil. Photo by Lorraine Gabbert.

San Jose residents stood with the Ukrainian community on Tuesday, holding a vigil at City Hall with signs, flags, yellow Gerber daisies and candles against the backdrop of City Hall alit in the blue and yellow of the Ukrainian flag.

Students from Ukraine spoke about their concern for their families at the event led by Orchard City Indivisible, a progressive advocacy group.

“If people believe these values are important, they should help the fight in Ukraine,” she said, adding it was uplifting to see dozens of people show up for the event.

Pistunova, born and raised in Ukraine, said the streets now lie in ruins and while her mother hides in the cellar without electricity or water, her father is out fighting. She is scared to miss a text message from him as it could be his last.

Resident Nancy Anders appreciated the opportunity to stand with others at the vigil. Photo by Lorraine Gabbert.

Two weeks into the invasion, Russian bombs are still devastating Ukraine, including a strike on a Mariupol hospital maternity ward. Although efforts to evacuate civilians from bombed cities have resumed, many remain trapped in areas of heavy fighting.

“It’s easy to feel helpless in times like this,” Pistunova said. “But… now’s the time to act.”

Resident Nancy Taylor said she’s concerned for Ukraine and cries every time she watches the news, but it helps to stand with others at the vigil.

“It’s kind of a relief to be able to do something in the community where we live,” she said.