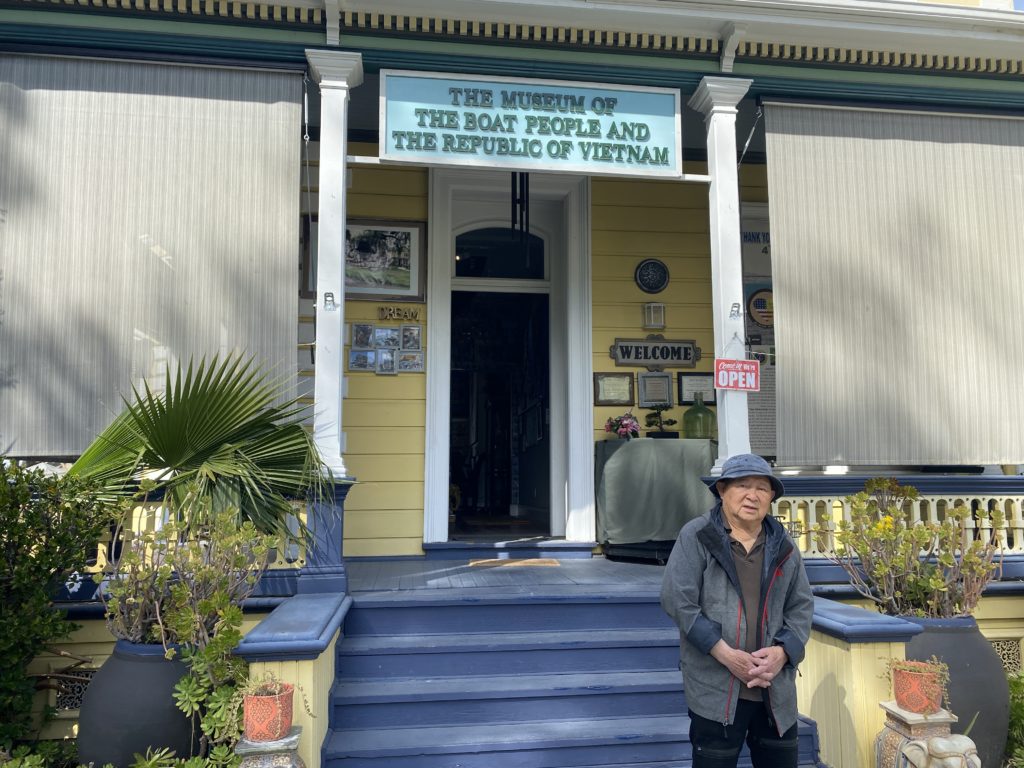 Behind one of the world’s largest museum collections dedicated to Vietnamese refugees is a dream of one San Jose man who wishes to keep their stories alive.

Tucked in a corner of San Jose History Park, a yellow historic Victorian house is home to the Museum of the Boat People & Republic of Vietnam, where founder and Executive Director Loc Vu has dedicated his life to preserving the history of Vietnamese refugees.

Lining the walls are cases of artifacts, hundreds of photos, maps and commissioned art of Vietnamese refugees and their escape from the homeland after the fall of Saigon in 1975.

Loc Vu in front of the Viet Museum in San Jose. Photo by Tran Nguyen.

The museum, also known as the Viet Museum, opened its doors in 2007 and welcomed tens of thousands of visitors a year prior to the COVID-19 pandemic.

Vu, a former colonel in the Army of South Vietnam who came to the U.S. with his family in 1976, has spent more than 20 years collecting and buying handwritten letters, photos, guns, uniforms, medals and even an actual boat for the collection.

“We started working on the museum in 1990,” Vu told thecupertinodigest.com in Vietnamese. “It took time and a lot of money, which all came through donations from all over the world.”

The museum, located more than two miles from downtown San Jose, is among the few cultural landmarks in Silicon Valley that honors the Vietnamese boat people and their descendants. San Jose is home to more than 140,000 Vietnamese residents, making it the city with the largest Vietnamese population in the U.S.

On a sunny March morning, Vu, sporting a faded bucket hat and a light jacket over his brown polo shirt, helped volunteers clean up the backyard of the museum. His eyes beam at every corner of the historic home that displays his life’s work.

Every artifact has a story of how it came to the museum, Vu said. He also heads the nonprofit, Immigrant Resettlement and Cultural Center, that helps Vietnamese refugees in the U.S.

Lining the walls of the Museum of the Boat People & Republic of Vietnam are cases of artifacts, hundreds of photos, maps and commissioned art depicting the Vietnamese experience of escaping their homeland after the fall of Saigon in 1975. Photo by Tran Nguyen.

One of his favorite pieces is a bronze map, prominently displayed at the entrance of the museum. It depicts a world without borders where boat people who set out to sea in a quest for freedom could find a new home.

“If we aren’t collecting them and creating new art about this now, the history and experience of millions of people will disappear,” Vu said. “It will all be gone.”

San Jose and Santa Clara County weren’t interested in funding the museum when Vu first started working on the project, he said. To turn his vision into reality, Vu rallied the Vietnamese community, as well as politicians—including former U.S. President Jimmy Carter—to support the project.

Loc Vu with one of his favorite pieces in the museum: a bronze map depicting the boat people setting out to sea. Photo by Tran Nguyen.

The museum dedicates a wall to all major donors, including Congresswoman Zoe Lofgren, Santa Clara County Supervisor Cindy Chavez and former Congressman Mike Honda, among others.

Lofgren, who has known Vu since her days of law school, said the Viet Museum is the pride and joy of Silicon Valley.

“I have meaningful memories of times assisting the very first refugees who arrived after the fall of Saigon, establishing language, health and educational services on the Board of Supervisors, volunteering with the Red Cross and working together on the establishment of the Viet Museum,” Lofgren told thecupertinodigest.com. “The Viet Museum has done vital work documenting and teaching future generations about the experiences of the more than one million people from Vietnam who have resettled in the U.S. and the many contributions the Vietnamese-American community has made to the South Bay.”

During the recent Tết celebration at San Jose History Park, Santa Clara County officials honored Vu for his years of service at the museum.

“Loc Vu’s preservation of the Vietnamese refugee history is itself a lifelong commitment to the defense of human rights,” Chavez, who represents the area, told thecupertinodigest.com. “The Viet Museum honors the experience of so many who lost so much and serves as a call to action to not let history repeat itself.”

Vu, who many also call “Uncle,” often spends his days at the museum. The former colonel, who’s now in his 80s, had thought of retiring—but has had trouble finding a replacement to take care of the museum until recently.

The job requires dedication and passion, but it doesn’t pay, Vu said.

Hong Cao, a longtime San Jose resident who recently retired from his City Hall job, said it’s an honor to be handed the torch from Vu.

“Uncle Loc has been looking for somebody to take over,” Cao told thecupertinodigest.com. “I’m pretty new at organizing in our community, but I’ll try my best to keep the museum going.”

Cao hopes to start digitizing the artifacts in the museum and to create listening tours for visitors.

Manpreet Dhindsa and his three-year-old son Prawaan. Dhindsa said the Viet Museum offers a window into the past. Photo by Tran Nguyen.

Outside of the museum, Manpreet Dhindsa and his 3-year-old son Prawaan said they have visited several times. Dhindsa said he learns new things with each visit.

“It’s a great experience learning the history of our community,” he told thecupertinodigest.com. “The museum’s really a window into the past.”