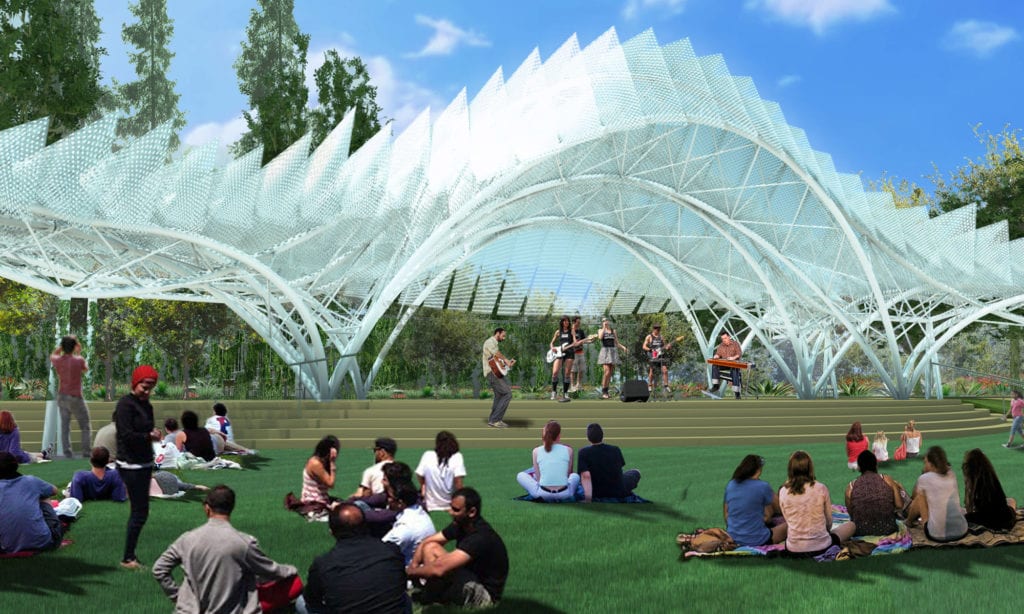 San Jose and proponents of a downtown pavilion have been in a battle with a men’s social club over St. James Park. Now it may be coming to an end.

On April 4, the Superior Court of Santa Clara County upheld an environmental impact report and historic preservation permit for St. James Park, denying a petition by the Sainte Claire Historic Preservation Foundation, a nonprofit dedicated to preserving the Sainte Claire Club building—the site of the second-oldest men’s social club in the state.

“The court’s decision has made it clear that the city has legally and professionally done their job in protecting the values, history and legacy of St. James Park,” said Fil Maresca, board chair of Friends of Levitt Pavilion San Jose. “The time has come to build the pavilion, renovate the park and put the community first.”

Levitt Pavilion is a private foundation which has transformed seven struggling parks across the nation with outdoor music venues. The plans to revitalize the struggling downtown park, which attracts crime and homelessness, include a playground, dog park, picnic area, cafe and restrooms. The pavilion would hold concerts for picnic-goers on a lawn sized to accommodate 5,000 people.

The reimagined St. James Park in downtown San Jose will include a multi-use pavilion. Image courtesy of Friends of Levitt Pavilion San Jose.

According to the environmental impact report, the new pavilion would have “significant and unavoidable” impacts on the historic character of the park. The club filed a lawsuit in November 2020, claiming it violated the state’s environmental review process and the city’s historic preservation rules which prohibit approval of a project because it is “detrimental to a historic district or to a structure.”

The club asked the court to reverse the city’s approval of the project and conduct another environmental study. During this time, the city and men’s club unsuccessfully tried to settle the matter in February.

The Sainte Claire Club did not respond to requests for comment.

“I’m happy to sit down with the folks at Sainte Claire and address any concerns they have because I think we have the answers,” Maresca said. “They have not given us that opportunity.”

Rick Holden, a Friends of Levitt Pavilion San Jose board member, said he feels gratified they won the case, but he assumes the club will appeal.

“Probably their strategy is delay, delay, delay, and hopefully we’ll go away,” he told thecupertinodigest.com. “That’s not our intention by any means. We’re planning on moving forward.”

Being a good neighbor

Holden said the St. Claire Club, which is located across from St. James Park, doesn’t like the homeless people in their front yard, but doesn’t like change either.

“They’re afraid what we’ll put in there is too loud, too many people and too many concerts,” he said, “which we don’t feel is the case at all. In every instance, the Levitt Pavilion has been a good neighbor.”

Another concern, according to the environmental report, is up to 300 shows per year will take place. Maresca said the number is closer to 50. He said the state-of-the-art sound system will direct music toward the lawn and the performances will be family friendly.

“The history of Levitt Pavilion is they go into parks that are underutilized and turn them into welcome destinations,” Maresca said. “If our unhoused friends want to hang out at the park, they can. But as studies show, when parks are activated on a regular basis, crime disappears. People gain a healthier respect for not just the park, but for the neighborhood.”

Before Levitt Pavilion updated MacArthur Park in Los Angeles, it was crime-ridden with gangs and drugs and no families would set foot in it, Maresca said. Afterward, soccer fields and restaurants went up around it. Levitt Pavilion chose a vacant lot in Arlington, Texas in front of a boarded-up City Hall for one of its sites. After it was created, City Hall reopened, a library opened and two hotels were built nearby.

The pavilion will cost about $20 million. The full St. James Park revitalization project is about $63.9 million. About $10 million has been raised from development fees within a mile of the park. Friends of Levitt Pavilion San Jose is committed to raising at least $5 million.

The plans for the pavilion and park update will go before the City Council in late summer or early fall. Afterward, fundraising can begin. The target date to start construction is late 2024 or early 2025.

Holden said he’s resolved to continue with the pavilion project to “turn St. James Park around.”

“I just believe it’s the right thing to do and we need to keep moving forward… until we get it built,” he said.