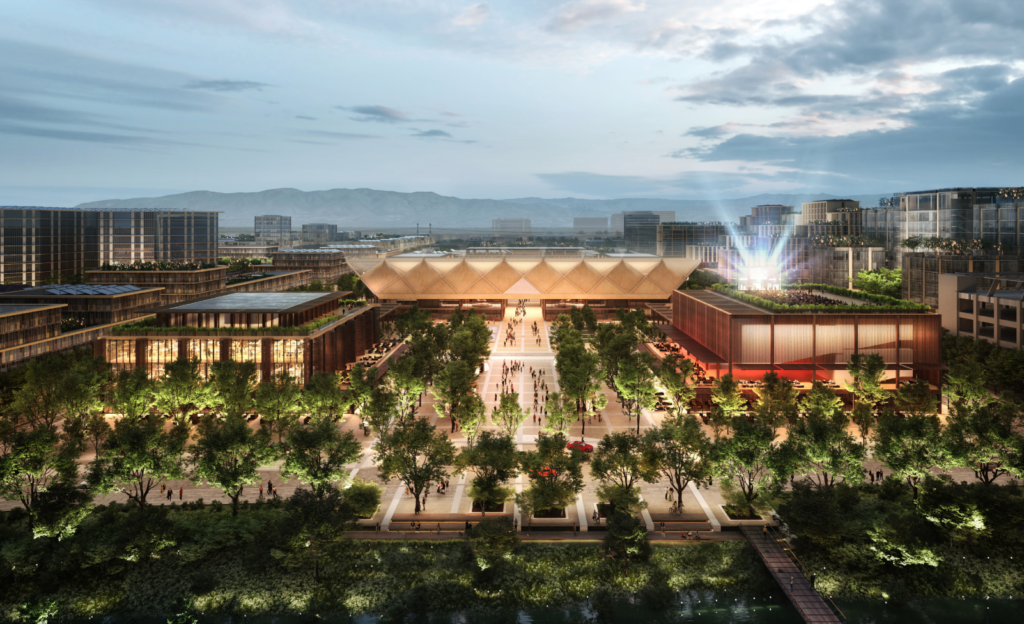 “Like many large, mixed-use projects, the pandemic has pushed back our timetable, but (Related Santa Clara) is on track and expects to break ground later this year,” Evette Davis, spokesperson for developer The Related Companies, told thecupertinodigest.com. “We know of no obstacles and look forward to making more definitive announcements about the project soon.”

Related Santa Clara, located at 5155 Stars and Stripes Drive in Santa Clara, set local records for the project’s scope and scale when it was approved back in 2016.

However, the environmental documents for the project point out several concerns. One report indicates the project is expected to have “significant and unavoidable” impacts on air quality, interfere with native wildlife’s migratory movement, generate greenhouse gases, increase noise levels and impact utility and service systems. The City Council, nevertheless, accepted those impacts when it approved the development.

He noted the project is being built on a former landfill site, which creates additional logistical challenges for the developer.

“It’s a very complicated thing,” he said. “How do you put housing (and) offices on toxic waste?”

The answer involves roughly 40 acres of raised concrete platforms, he said. At the time the project was approved, Jain was a planning commissioner and voted against the project moving forward.

Lenny Siegel, executive director of the Center for Public Environmental Oversight, was active in raising environmental concerns at the time the project was approved.

Developing on landfills is risky, he said, because gases like methane and volatile organic compounds can leak upward from underground and pose fire and health risks.

Because of that, it’s far more common to put things such as parks, hiking trails or solar panels atop former landfills, he said. Housing is rare, because it exposes people to those risks full time.

At the Related Santa Clara development, Siegel said, the developer seems committed to paying for whatever it takes to make the project site work. The developer plans to drive piles through the buried waste into bedrock and “basically build the project on stilts.” From there, the developer will install a podium and collect gas from underneath it, he explained—noting it’s unprecedented to see a development on this scale.

“To my knowledge, there was never any environmental outcry from people in Santa Clara,” he told thecupertinodigest.com. “In a lot of cities this would have attracted a lot more attention.”

There are plenty of challenges that could still arise as construction begins, he noted. The developer could accidentally release underground contamination while driving the piles into the ground, or it could happen that not all the piles are pushed through the landfill into bedrock and, years from now, the project could start to lean, he said.

But his biggest objection to the project is the greenhouse gas emissions expected to be generated from the project’s abundance of jobs compared to homes, he said.

In all, Related Santa Clara is expected to generate about 25,000 new jobs in Santa Clara, according to the developer.

The construction will take place in phases, the first of which is set to start on a 14-acre parcel on Tasman Drive across from Levi’s Stadium. It will add roughly a million square feet of development, including 440,000 square feet of office space, 480 hotel rooms, 200 homes and 51,000 square feet of retail and restaurant space.

Even after the Santa Clara City Council greenlit the project more than five years ago, shovels remained above ground due to legal problems. San Jose sued Santa Clara, alleging the development would not add enough housing and thereby worsen housing demands on the neighboring city. San Jose demanded Santa Clara add more housing to the project.

In 2020, the city announced a number of road closures surrounding the project site, including Stars and Stripes Drive and Centennial Boulevard as early site work began. In addition, the San Tomas Aquino Creek Trail pedestrian and bicycle bridge is temporarily closed.

In preparation for the first phase of the project, Related Companies paid $2.2 million for renovations to Santa Clara’s Fire Station 8 and is paying about $15 million to build a new Fire Station 10, which will be relocated during the second phase of the development, according to the city.