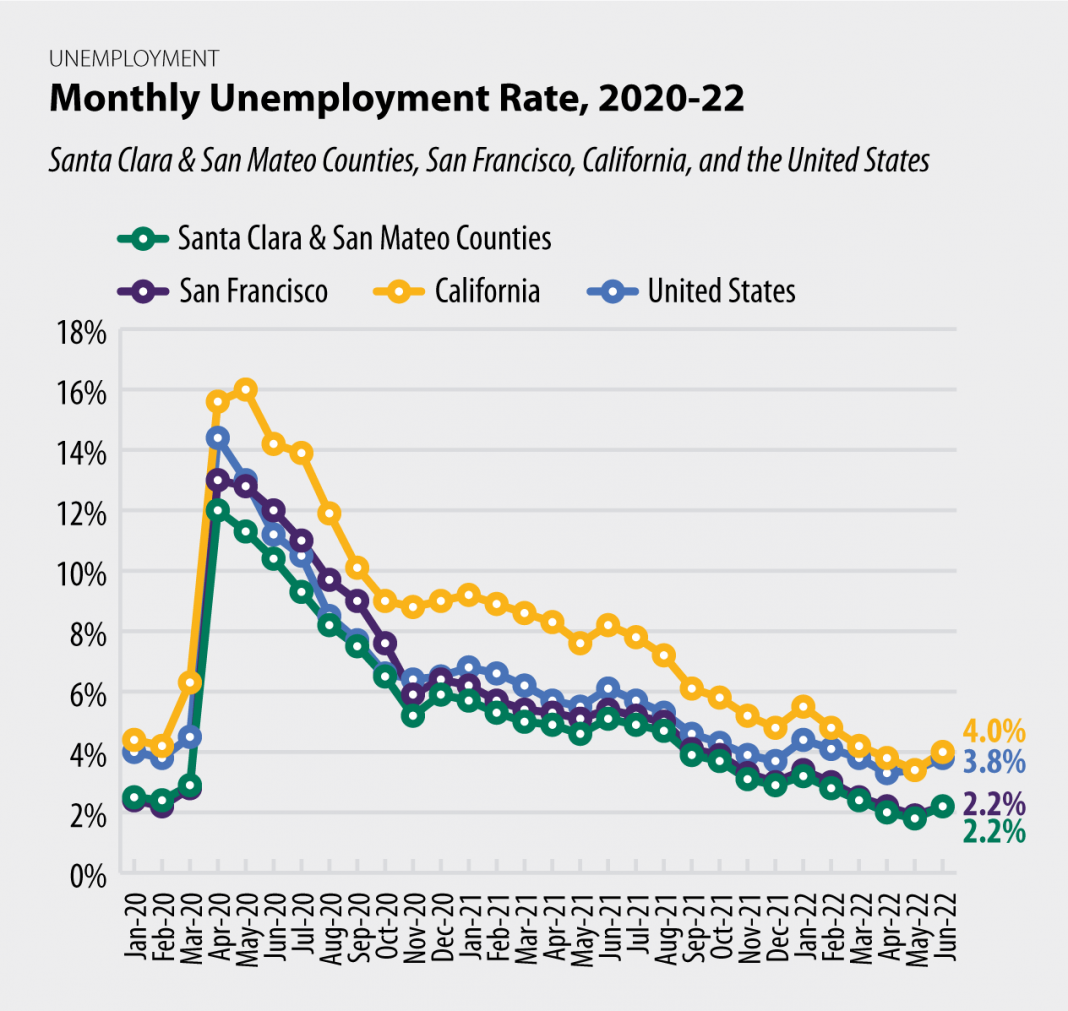 The Silicon Valley unemployment rate went up in June—but experts say it’s not a cause for concern.

A report by Joint Venture Silicon Valley shows unemployment rates increased by 0.4% in Santa Clara and San Mateo counties between May and June. Unemployment is currently at 2.2%, or approximately 32,300 people—9,200 in San Mateo County and 23,100 in Santa Clara County.

The increase is fairly typical, according to the report. Unemployment rates tend to go up in the summer as the school year ends and jobs associated with education decline. It’s been that way for the last 32 years, with the exception of 1996 and 2020 during the COVID-19 pandemic when the initial large drop in employment began to steady, the report notes.

The 2.2% regional rate is still fairly insignificant, and would have to go above 6-7% to be concerning, Guo said.

“It’s still really low relative to a year ago or the last recession in 2008,” Guo told thecupertinodigest.com. “The current unemployment rates don’t really scream that we’re heading into a recession.”

With inflation the highest it’s been in 41 years and a decrease in Gross Domestic Product in the last quarter, there is concern about a looming recession. The price of gas is up 50.1% in the Bay Area year over year, according to the Bureau of Labor Statistics, and utilities like natural gas and electricity are up 33.6% and 19%, respectively. Food prices are up 10.8%, with cereals and bakery products up 13.6%. Household furnishings and supplies have jumped 9.5%.

That coupled with the housing crisis has made rent and mortgages unaffordable for many. A recent study found it takes four minimum wage jobs to afford rent in San Jose—one of the most expensive places to live in the country.

In terms of employment, Silicon Valley is doing better than the rest of the nation primarily because of the tech industry. Information jobs represent the greatest month-over-month increase in the greater Silicon Valley region, outpacing leisure and hospitality, according to the report.

Publishing industries, including magazines, books and other media except internet, added 1,500 jobs as part of the larger sector from mid-May to mid-June. Leisure and hospitality increased by 2% with 4,200 new jobs—most of those in restaurants with 2,700 jobs. Professional and business services, which includes jobs in legal, accounting, consulting services and engineers, was another sector with notable gains that added 3,200 jobs.

Inequity in Silicon Valley persists for people of color

“There’s still a chance we could have like a soft landing where inflation can come down without too much of a drop in it, or too much of an increase in unemployment,” Guo said. “These unemployment rates (show) there’s still business confidence in hiring. That’s a good sign.”

While some companies have placed hiring freezes in anticipation of a potential recession, Katie Birkelo, senior vice president of Randstad USA, said their staffing offices continue to see requests for additional workers.

“Employer demand for labor remains at an unprecedented high, even in the blue-collar industries that often serve as key markers of an economic downturn,” Birkelo told thecupertinodigest.com.

Data from Randstad found more people are applying for jobs, with office professional jobs increasing 192% from this time last year, manufacturing and logistics up 102% and 38% for tech workers in the same time period.

“We’re also seeing higher wages across the board for Randstad hires, though this is undercut by record-high inflation and a recent slowdown in wage growth,” Birkelo said.

Ryan Young, research manager for BW Research and an affiliated researcher at Joint Venture, paints a more grim picture. He says the story is not in the unemployment numbers, but the decrease in the overall workforce.

“The labor force is still 40,000 below February 2020, making it very difficult for employers to hire within the region,” Young told thecupertinodigest.com. “That’s an issue for growth in the region and Silicon Valley.”

The decrease, Young believes, is due to people moving out of Silicon Valley. The San Jose metro area, which includes Santa Clara and Sunnyvale, lost nearly 43,000 people between April 2020 and July 2021—almost eight times more than the year before the start of the pandemic when the region lost roughly 5,400 residents, according to census data.

Young thinks people are leaving because of the increased cost of living. The staggering wealth inequality continues to grow year after year. According to Joint Venture, the top quarter of Silicon Valley earners hold 92% of the region’s wealth; the top 10% of earners hold 75% of the wealth.

“Seeing the thing that professional tech services and computer design services are increasing over pre-pandemic levels means that the rich are getting richer and the divide deepens,” Young said. “Even though unemployment slowed, that doesn’t mean that people aren’t struggling and having to work multiple jobs.”