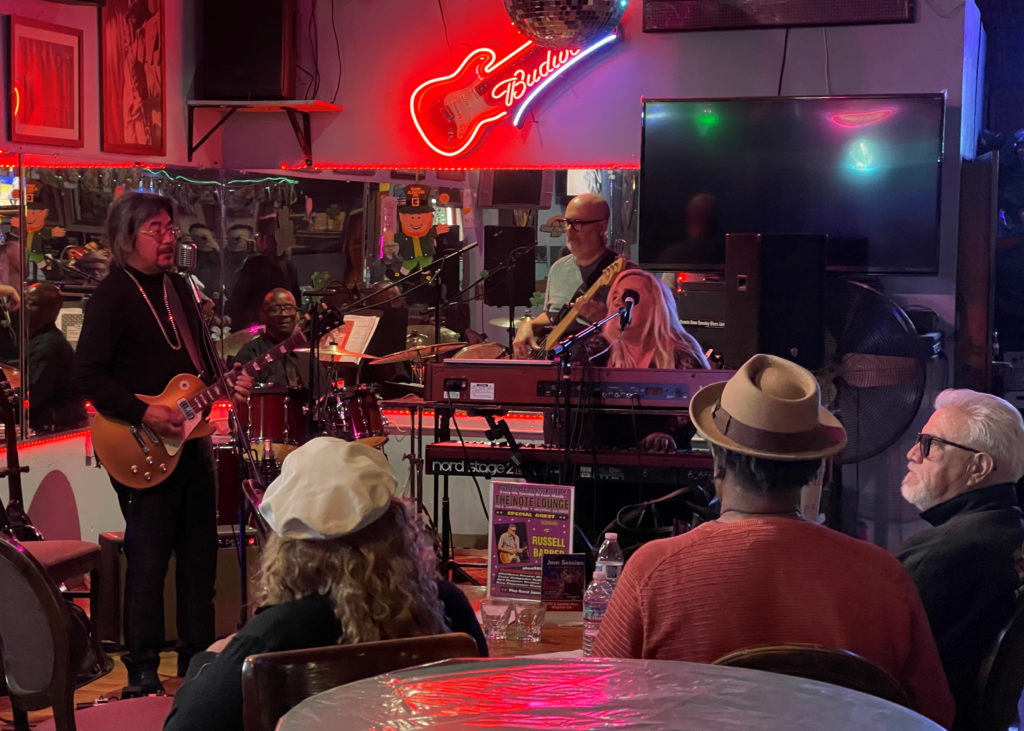 The Biz Beat: Booze and bands at The Note Lounge in Milpitas

If you’re looking for the finest Japanese-born bluesman ever to come out of the clubs of Chicago to play in Milpitas, you’ll find Yoshi Senzaki playing guitar at The Note Lounge, a low-key bar with a unique character and excellent live music.

“When The Note reopened after the COVID restrictions were lifted, our band sometimes outnumbered the customers,” Senzaki told thecupertinodigest.com. “But now, this is where real blues fans are starting to gather because this bar is known for being so friendly and accepting.”

The Yoshi Senzaki Blues Band plays at The Note Lounge in Milpitas. Photo by Robert Eliason.

The Yoshi Senzaki Blues Band is a regular act at The Note Lounge, which also features karaoke nights, a well-curated jukebox and big-screen TVs for sports events. It’s an all-purpose, all-tastes bar that prides itself on welcoming newcomers and pouring customers an honest drink.

“We may not have the atmosphere of a Santana Row bar,” said manager Michele Jackson. “But we have the coldest beer in Silicon Valley and our drinks are far better and much cheaper. We don’t overflow our drinks with juice or whatever the secondary ingredients are, and we pour an ounce and a half—not just an ounce like most bars. We are dedicated to mixing drinks right and our customers appreciate it.”

Michele has been working for her father, bar owner Steve Jackson, for 31 years. Steve opened The Note Lounge in 2003 after running another bar, The Three Plus One Club, for 18 years. According to Michele, The Note’s location was less than promising.

“This place used to be a biker bar,” she said. “Dad called me down one day to see it and I said, ‘No way,’ because this place was so small and I could not envision it as being anything different. But it was a good price in a decent location and he knew what he wanted to do with it.”

As one of two Black-owned bars in the area, The Note Lounge rapidly cultivated a following among locals and in March 2020, Steve received the Business & Entrepreneur Award from the Silicon Valley Black Legends Hall of Fame.

“We had a big party for him,” Michele said. “Then the pandemic hit the week after. We were shut down for almost two years and we were not sure we were going to make it.”

Once the bar opened up again, Michele said The Note Lounge kept strict health and safety protocols. Masks were required and on “Vaccinated Sundays,” customers had to show their COVID-19 vaccination cards to get in.

“At times, we do have an older crowd, which is part of my dad’s following,” she told thecupertinodigest.com. “We wanted people to know that they would be safe coming here.”

Even with the precautions, many of the old customers were reluctant to return to such a public setting.

“Business was slow when we first reopened,” Michele said. “So we started booking more bands and doing a lot of social media, trying to reach a larger group of customers. Since then, we have had more types of people trying us out. So we now have a really diverse crowd, and the place is much better because of it.”

Customer Rita Ramirez has been coming to the bar for 11 years. A musician herself, she loves the live bands and the atmosphere.

“The first time I came, my impression was that this is a family-oriented place with great customer service,” she said. “I am so confident in how they take care of you that I will have parties at this place and invite anywhere from five to 30 people to come with me. And my friends always end up telling me they will be coming back.”

AJ Torres at The Note Lounge. Photo by Robert Eliason.

The successful transformation from a biker bar to a jazz lounge is underlined by the decor—walls covered with photographs of Black musicians and sports heroes, as well as cultural and political figures—and the relaxed, welcoming vibe that greets you as you enter the place.

“I have been coming here since Thanksgiving—it was the only place open,” customer AJ Torres told thecupertinodigest.com. “We came here and everyone was cool. I was going through a rough patch, but everyone here treated me like family. I have been coming here ever since. They know my name, they know what I drink, and when I come here, everybody reaches out to me. This is not like any other bar I have been to before. It is more like being with family.”

What puts them on the map: Generous pours and the atmosphere

The post The Biz Beat: Booze and bands at The Note Lounge in Milpitas appeared first on thecupertinodigest.com.