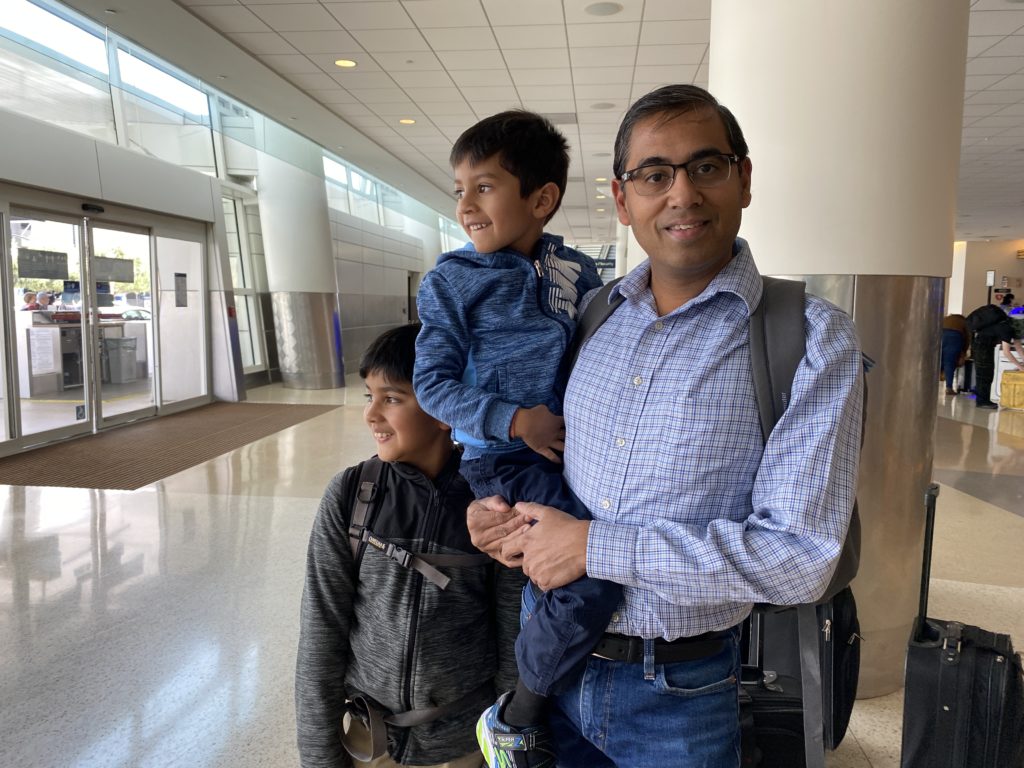 Travelers across the country can now drop their masks in airports, but some flying through San Jose said they’re keeping the protective layer on.

Garg, who wasn’t wearing a mask at the entrance of Mineta San Jose International Airport on Wednesday, said he and his family will put face coverings on during their flight.

San Jose resident Ashu Garg said his family will keep their masks on during their flight to San Diego this week. Photo by Tran Nguyen.

Garg and his family—along with thousands of people traveling through the airport daily—can shed their masks for the first time after more than two years of the COVID-19 pandemic, airport officials announced this week. The decision follows a federal court ruling that abruptly ended the nationwide mask mandate on public transportation and airplanes.

“As of April 18th, face coverings are no longer a requirement at Mineta San Jose International Airport,” airport spokesperson Keonnis Taylor told thecupertinodigest.com, adding that masks are still strongly recommended and airlines can still enforce mask mandates. “SJC encourages travelers to consult with their airlines and public health authorities at their destinations prior to traveling.”

Airports in neighboring cities in the Bay Area also dropped the mandate earlier this week. VTA became the first major Bay Area public transit agency to do away with its mask rules on Wednesday.

COVID transmissions in Silicon Valley have declined significantly since the peak of omicron-fueled infections in January. But the number of cases in April is slightly higher than what the county saw in the previous month. As of Wednesday, the seven-day rolling average of new COVID infections is 229—the average in mid-March was about 150. Hospitalizations remain low and stable with 78 patients with COVID this week.

The South Bay also has some of the highest vaccination rates in the nation, with roughly five of every six residents fully vaccinated and nearly 69% of the eligible population boosted.

Some health experts worry the federal mask mandate on public transportation ended too quickly, with no time to transition or plan. The rule was previously set to expire May 3.

“The (virus) is still around us,” Dr. Marcelle Dougan, assistant professor of public health at San Jose State University, told thecupertinodigest.com. “There’s still an active level of cases and transmission, people are still catching the virus and the consequences of the virus are not harmless.”

Residents who are immunocompromised, cancer patients, older people and children still don’t have the same levels of protection from vaccinations. Many can’t even get vaccinated, Dougan said.

“There is no need to rush to just get rid of some of these barrier methods,” she said.

MaryAnn Michlovich, a Los Angeles resident who’s flying out of Mineta San Jose International Airport after her college tour of Santa Clara University, said she feels conflicted with the ending of the mask mandate. Photo by Tran Nguyen.

MaryAnn Michlovich, a Los Angeles resident who’s flying back after her college tour of Santa Clara University, said she feels conflicted with the ending of the mask mandate, but will keep her mask on when flying for now.

“In some situations like in restaurants, I think the mandate is pointless,” Michlovich told thecupertinodigest.com. “But I think wearing masks is still important in many enclosed spaces. I’m young so I’ll be fine, but I don’t want to infect my mom or my family because I’m not careful.”

Alice Freeman, a Maryland resident who’s visiting her brother in San Jose, said many people on her flight kept their masks on.

“I’m still very nervous about all this,” Freeman told thecupertinodigest.com while waiting for her luggage. “In Maryland, the virus has come back. I think it is too soon to get rid of the masks.”