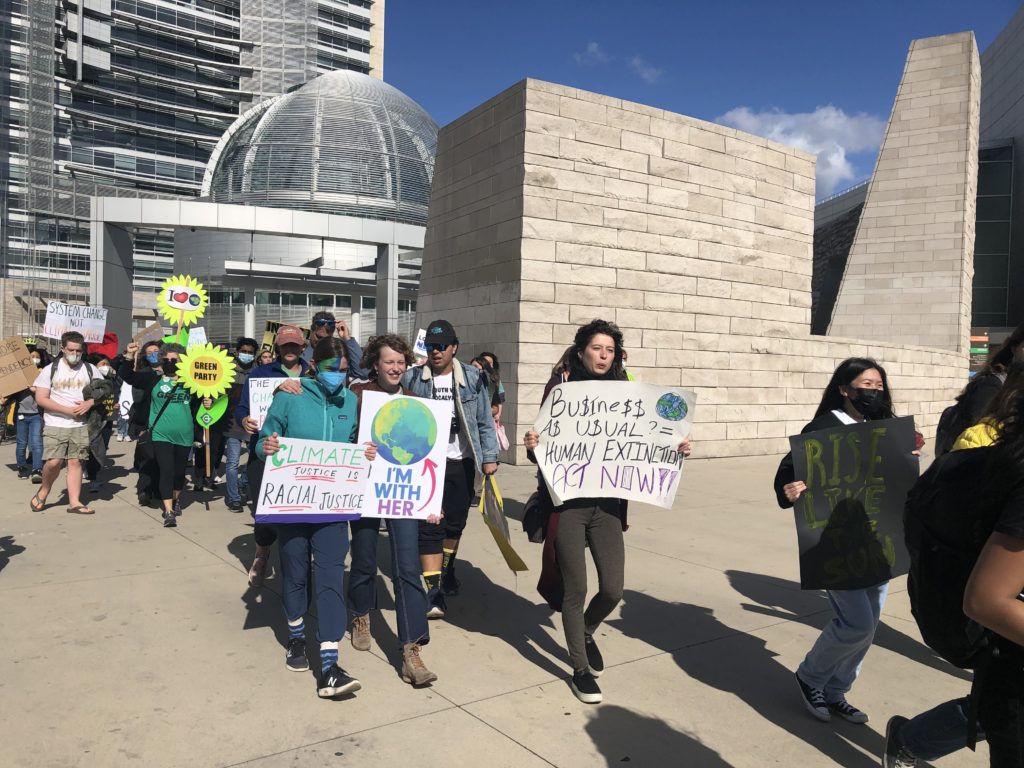 With a severe drought and the potential for early wildfires affecting Santa Clara County, Earth Day has protesters rallying to change the way people interact with the planet.

Shouting “Carbon change is not a lie, do not let our planet die,” members of Sunrise Movement Silicon Valley marched from San Jose City Hall to rally at Plaza de Cesar Chavez on Earth Day. About 100 people, many of them part of the Silicon Valley Youth Climate Strike 2022, walked to bring awareness to environmental advocacy and justice.

Sydney Ernest, 15, said the city needs to listen to scientists who are doing the research. San Jose needs to implement local measures to encourage more use of public transit, better water systems and green electricity.

Other protesters, including 25-year-old Thao Lệ, targeted housing and how the city should address it moving forward.

“I think we should pass the Community Opportunity Purchase Act to preserve housing because it’s a lot more sustainable than constantly building new housing,” Lệ told thecupertinodigest.com. “Housing justice and climate justice are interrelated. When people are displaced and have to commute further for jobs, it causes more traffic and environmental pollution, especially for communities of color who are most impacted by gentrification.”

Cortese said San Jose and Santa Clara County have been leaders in the state with the elimination of natural gas and the county being 100% renewable.

How San Jose plans to be carbon neutral in nine years

“I think the cities and county can eliminate dirty energy,” he told thecupertinodigest.com. “We need every household in every city using clean energy on a day-to-day basis.”

In November 2020, chanting “No justice, no sleep,” members of Sunrise Movement marched through a neighborhood early in the morning to protest outside Mayor Sam Liccardo’s home. They sought to capture political backing for measures to prevent climate change before the November election.

Through Climate Smart San Jose, the city aims to be carbon neutral by 2030, rather than 2050 like other major cities. San Jose will either offset all carbon emissions to reach a net-zero, or eliminate carbon emissions entirely.

Although some are skeptical of the city’s ambitious goal, it has already required all-electric energy in new construction, solar readiness in non-residential buildings and electric vehicle charging stations at residential buildings and hotels. San Jose is also looking to densify its downtown core, creating urban villages near public transit to reduce the number of vehicle miles traveled.

“If there is one issue that needs to unite all of us, it’s climate change,” said Peter Ortiz, who is running for City Council in District 5. “It’s crucial youth elevate their voices and those in public office take time to listen.”

The post Earth Day protesters want San Jose to do more for the planet appeared first on thecupertinodigest.com.