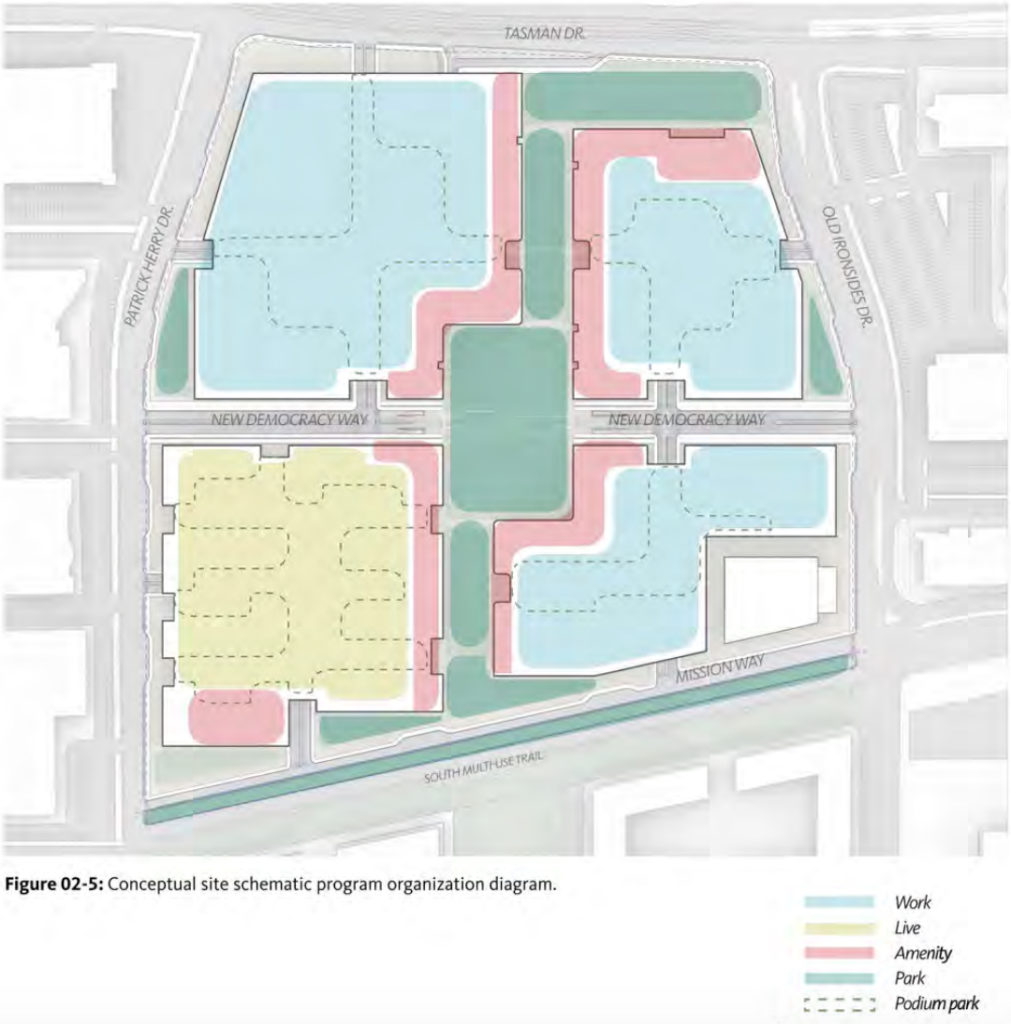 A developer looking to redevelop 46 acres of northern Santa Clara has scaled back its plans by more than half.

Mission Point is a proposal to build a new mixed-use neighborhood by developer Kylli at 3005 Democracy Way in Northern Santa Clara. It was first submitted in 2019 after collecting feedback that began in late 2017.

Since then, the project has been redesigned and scaled back substantially, cutting the overall size to 5 million square feet from 10.6 million.

Project representatives provided an update at a community meeting last week. Midori Mizuhara, an urban planner at the design firm Gensler, explained how those guiding the project—still in its design phase—hope to increase the site’s flexibility as they reimagine the post-COVID future of development.

In all, it’s expected to add 3 million square feet of office space, 1,800 homes and 100,000 square feet of neighborhood retail space, along with up to 13 acres of public open space on the ground level and 10 acres of elevated open space. That’s a significant decrease from the project’s initial 2019 proposal, which would have had three times more housing and  four times the retail square footage.

The site, previously owned by Yahoo, is just north of the Patrick Henry Specific Plan area the Santa Clara City Council rezoned last week to permit up to 12,000 new residences and 310,000 square feet of non-residential uses on 74 acres.

One reason the project has been scaled back relates to height concerns raised by the Federal Aviation Administration (FAA). The developer proposed buildings that would reach 370 feet, but the FAA told the developer back in 2019 that anything taller than 61 feet would raise concerns about radar interference.

The plans for the site list the tallest building at 210 feet, but the new heights comply with FAA guidelines, according to the developer.

This site map shows the locations of the different blocks planned at the proposed Mission Point by Kylli development, including housing, office and neighborhood retail spaces alongside parks and open spaces. Image courtesy of Kylli/Gensler.

The commercial areas are expected to include three or four blocks of neighborhood retail spaces, each of which will provide a range of possible retail tenants, said Mark Fairman, architect at Gensler.

“Each work zone is sized to allow a range of possible tenants,” he said at the community meeting.

The updated designs include four blocks offering offices and commercial space, homes, shops and cafes organized around a central green and promenade that connects to a trail cutting across the southern portion of the site. The plans also list the possibility of dedicated space for day care and a police station.

Residents have expressed interest in seeing a grocery store, places for people to meet up, more affordable housing, education and day care spaces, interesting ground-floor restaurant or entertainment spaces, an emphasis on renewable and efficient energy uses and convenience when it comes to navigating the site by car, foot or bike—feedback the developer aimed to incorporate into the recently updated proposal.

“This is exactly what we need in Silicon Valley and particularly in Santa Clara,” Christian D. Malesic, CEO of the Silicon Valley Central Chamber of Commerce, told thecupertinodigest.com.

Santa Clara has a number of large redevelopment projects that are going to reshape the whole north side of the city, said Malesic, who lives on that side of the city. The projects will change habits of separating work, home and recreational areas. Residents won’t have to commute long distances and be far away from parks.

“We really are shaping the city of the future,” he said. “We’re ecstatic as a chamber.”

Kylli is an American subsidiary of Chinese pharmaceuticals and real estate company Genzon. The developer is also seeking community input via a digital survey.