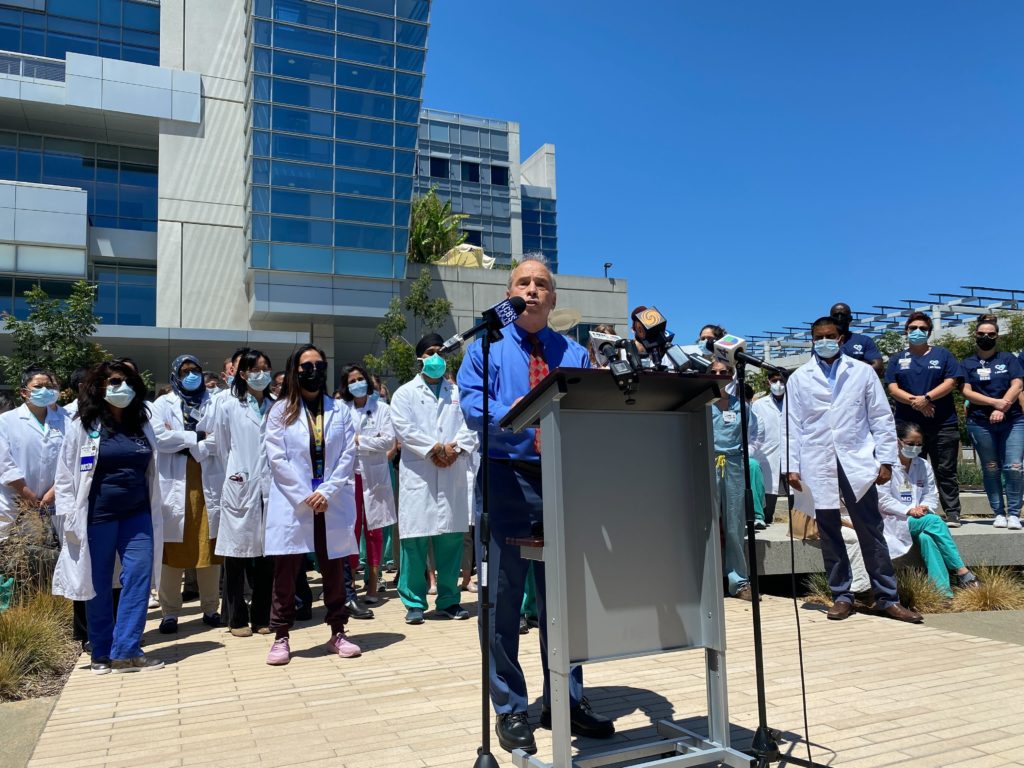 “We’re in a crisis,” Valley Physician Group chairman Stephen Harris told thecupertinodigest.com. The union represents nearly 500 doctors at three public hospitals in Santa Clara County. “We have suffered mismanagement for a very long time. And now we’re at the point where the system collapses, and management is pretending it’s business as usual.”

Ongoing problems such as chronic staff shortages, heavy workload and long waits for life-saving procedures at the Santa Clara Valley Medical Center (VMC) are pushing doctors to their limits, health care workers say. With the number of COVID-19 infections and hospitalizations on the rise again, doctors worry issues will only get worse.

The pressure is taking its toll on workers, with one VMC physician dying by suicide in his office in May. Another physician is under mental health evaluation after pointing a gun and knife at law enforcement last week. The county has not acknowledged the second incident, Harris said.

On Tuesday, more than 50 doctors, nurses and other health care workers gathered outside VMC to call attention to the issues they’re facing. Harris said management is telling workers to “suck it up.”

“(That) stops today, because this management strategy is inflicting serious harm and posing serious risk to our health care workers,” Harris said. “This crisis is not about a few doctors, it’s about an entire management system that is chewing us up.”

Doctors demand the county hire more workers, reconsider workload and include them in the decision making process. County physicians have been working without a contract for more than 18 months, union representatives said. Nine VMC doctors recently delivered a petition signed by 3,500 workers and residents to the Board of Supervisors demanding better pay and working conditions.

Dr. Gregg Adams, a trauma surgeon at VMC for 23 years, shared how workplace issues have affected his department. He said VMC lost four surgeons in April 2021, and since then seven full-time surgeons are responsible for the work of 15-17 people. He noted six potential hires have turned down offers.

“The physicians and hospital staff at VMC have reacted admirably bravely and effectively to meet this challenge, and we’re proud of what we have accomplished. But we’re exhausted,” Adams said.

“Not only is that response insulting, it is straight up demoralizing,” Ruiz said.

VMC physicians, nurses and other health care workers told thecupertinodigest.com the workforce is exhausted and frustrated with county leadership for ongoing workplace issues, which have exacerbated over the pandemic. Many are working long hours, taking on the job of two or three people, and in some cases having to watch their patients’ health deteriorate because of the lack of workers and decrepit equipment.

The working conditions at the hospital are leading to a phenomenon called “moral injury” among the workforce, doctors said. Moral injury is a type of trauma that stems from guilt, existential crisis and loss of trust after a person’s moral beliefs and values are violated, according to a 2016 study published by the American Psychological Association.

The syndrome, distinct from burnout and exhaustion, is linked to serious distress, depression and suicide, according to The Moral Injury Project at Syracuse University.

“This is getting worse,” a VMC worker told thecupertinodigest.com. They asked to remain anonymous out of fear of retaliation. “We already had one (who) committed suicide and one attempted. How many more do they need to have on their hands before they really look at the system and say something’s not right?”

Health care workers at VMC have brought concerns to the hospital administration, county executive office and the Board of Supervisors since the beginning of the pandemic, Allan Kamara, president of the Registered Nurses Professional Association, told thecupertinodigest.com.

“If you go back to all the stories on health care workers in the past two years, every one of those stories was a cry for help,” Kamara said. “Now the cry for help is taking on a whole different form.”

The issue, predating the COVID-19 pandemic, reached a boiling point after physicians and workers spent more than two years fighting the virus that has killed 2,355 people in Silicon Valley. The doctors’ suicide attempts came as county health care workers started speaking out about the unsafe working conditions and culture of fear at VMC.

Valley Physician Group represents doctors at Santa Clara Valley Medical Center, O’Connor Hospital and St. Louise Regional Hospital. The union is still in negotiation with the county, as it is pushing back on a plan to tie some workers’ pay to the number of patients they see.