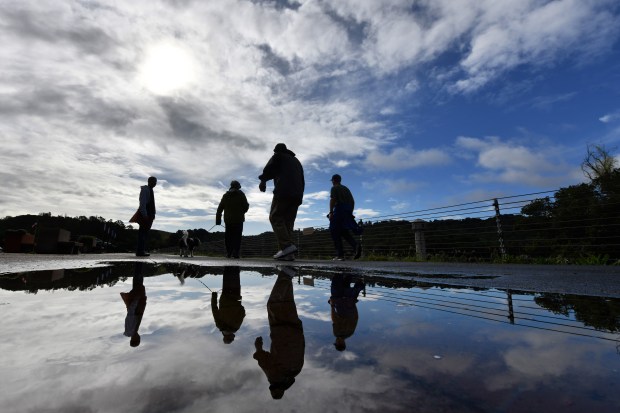 Was Monday’s storm the Bay Area’s last shot at substantial rain for the season?

Northern California’s prospects for a so-called “Miracle March” — a rainy month, providing a boost to the state’s snowpack and reservoirs, as happened a few years ago during the state’s last deep drought — appear to have dried up.

Forecasters say a modest storm system that churned inland to start the week will give way to sunny skies and warming temperatures for the foreseeable future, leaving dwindling chances for the Bay Area and Northern California to find relief from a punishingly-dry start to the year.

While the storm that moved in Sunday night and lingered Monday proved sizeable enough to briefly forestall serious fire conditions, the region needs to see far more moisture to have a sizeable impact on a persistent drought, now in its third year.

“This is the time of year we start to expect those rain systems to become fewer and fewer,” said Brayden Murdock, a National Weather Service meteorologist. “I wouldn’t say just yet that we’re done,” Murdock added, but storms will likely become even less frequent in the next month.

Almost the entire Bay Area received at least a quarter-inch of rain by Monday afternoon, with another 1-2 inches of rain falling over the Santa Cruz mountains. As of 2:30 p.m. Monday, San Jose received .25 inches of rain, while much of the East Bay received .5 to .75 inches of rain, according to the weather service.

San Francisco appeared to receive the least moisture, with downtown receiving just .18 inches of rain. But across the Golden Gate Bridge, rainfall on Mt. Tamalpais totaled about an inch, and much of the North Bay received well more than a half-inch of water. The Big Sur coast received even more precipitation, with several gauges reading more than 2 inches of rain and one gauge at Mining Ridge reporting 4.13 inches from the storm.

Some high peaks across the Sierra were expected to receive up to a foot of snow, but many areas received much less. Kirkwood Mountain Resort, for example, saw three inches of snow, the weather service reported. And even less fell near Donner Pass — though another band of snow appeared to hit the area Monday afternoon, slightly increasing those totals.

Rainfall was expected to continue Monday evening for some parts of the Bay Area. Thunderstorms also continued lining up along the Big Sur coast — meaning the area could still see some flash flooding, despite having escaped any serious damage along the Colorado and Dolan fire burn scars through Monday afternoon, Murdock said.

The moisture came as a welcome salve amid a record-breaking dry spell for the Bay Area. While many Bay Area cities were near their historical precipitation averages for the rainy season, almost all of that water came in a single late October storm and during several other storms in December.

Prior to Sunday, most of the Bay Area had received only 5 to 10% of the rainfall it normally gets from January 1 through late March.

San Jose, for example, recorded just .11 inches of rain from New Year’s Day through Sunday — a paltry 1.5% of the 7.28 inches it should have received by this time of the year.

SAN JOSE, CA – March 28: A rain puddle reflects downtown San Jose, Calif., on March 28, 2022. A storm dipped down from the Gulf of Alaska and arrived in the Bay Area Sunday night, dropping a decent amount of rain on a region left parched by an unusually dry start to the new year. (Dai Sugano/Bay Area News Group)

In just 24 hours, the Sunday-Monday storm managed to double or triple rainfall totals in some parts of the Bay Area.

Significantly, the storm dropped at least .1 inches of rain across almost the entire region — a critical benchmark for reducing fire danger, Murdock said. At that point, water can not only soak into the ground, but also aid grasses, shrubs and other types of vegetation that, when dry, quickly turn to fuel for wildfires.

“The fact that we get another opportunity to add some saturation to the fire fuels means our fire weather concerns have been eased a little bit more,” Murdock said. “So going into summer, that should lead us into some more promising conditions than what we were looking at last year.”

Still, any chances of late-season help taming the state’s ongoing drought appear to be evaporating. At least half of the snow that falls over the Sierra Nevada arrives in just a handful of storms from December through February.

LAFAYETTE, CALIFORNIA – MARCH 28: A water droplet from a recent rain storm hangs on the leaf of a succulent plant at the Lafayette Reservoir in Lafayette, Calif., on Monday, March 28, 2022. The Bay Area experienced some much needed rain last night and early this morning. (Jose Carlos Fajardo/Bay Area News Group)

As of Monday morning, statewide snowpack in the Sierra was at just 39% of normal for this time of year, according to the California Department of Water Resources. That snowpack figure was even worse along the Sierra’s northern peaks, which sat at just 31% of normal.

Almost all of that snow came in a single late-October atmospheric river storm, as well as a series of powerhouse systems that dumped a record amount of snow over the Sierra in December. Some parts of the Sierra were at 200% of their normal totals by New Year’s Day — figures that have since dwindled amid a record-breaking run of dry weather.

The U.S. Drought Monitor reported Thursday that about 94% of California is in “severe drought,” an increase from 87% from two weeks ago, while about 38% of the state is in “extreme drought,” the most dire stage, up from 13%. Extreme drought has spread to the North Coast, and all nine Bay Area counties are currently in a severe drought.

Early models appeared to show another chance of precipitation again next weekend, Murdock said. But, he added, those projections have seen grown more pessimistic.

For now, it’s anyone’s guess when the next round of rain may come.

“It’s almost nice to have more — hopefully we have another system before we call it quits for the summer,” Murdock said.

SAN LEANDRO, CA – MARCH 28: A pedestrian walks along a trail at Marina Park as storm clouds move across the sky on Monday, March 28, 2022, in San Leandro, Calif. Dry weather is forecast throughout the Bay Area for the rest of the week. (Aric Crabb/Bay Area News Group)